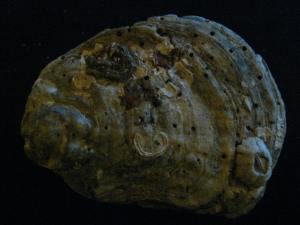 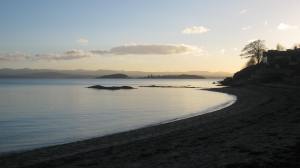 We thought we’d seen a ghost. It was an oyster shell on a Fife beach.

We quite often come across them – they must be some age because the Forth oyster has been considered extinct for many years.

The Forth oyster fishery once produced more than 30 million oysters a year – they were exported widely and were a cheap food. “Dreg songs” were sung by the fishermen as they rowed or sailed over the oyster beds towing dredges.

Indeed the history of oysters and man on the Forth is a long one – there are records of shell middens around the Forth from the Stone Age up to when the Romans tramped these shores.

Not far from this beach you can see oyster shells in the mortar of the walls of Aberdour Castle.

Overfishing spelled the end of the fishery. The collapse began in the 1870s and fishing stopped completely in 1920. In 1957 native oysters in the Firth were thought to be extinct.

In 2009, decades later, live oysters were found in the Firth. This has led to speculation over recovery of the stocks and possible future commercial production.

Maybe hold back on the tabasco and lemon juice for now though. For the time being the only wild oyster fishery in Scotland is in Loch Ryan.

It’s early days for a recovery of the Forth oyster but it is nice to hear a positive story for a change. And maybe some day we’ll be eating local oysters once again.